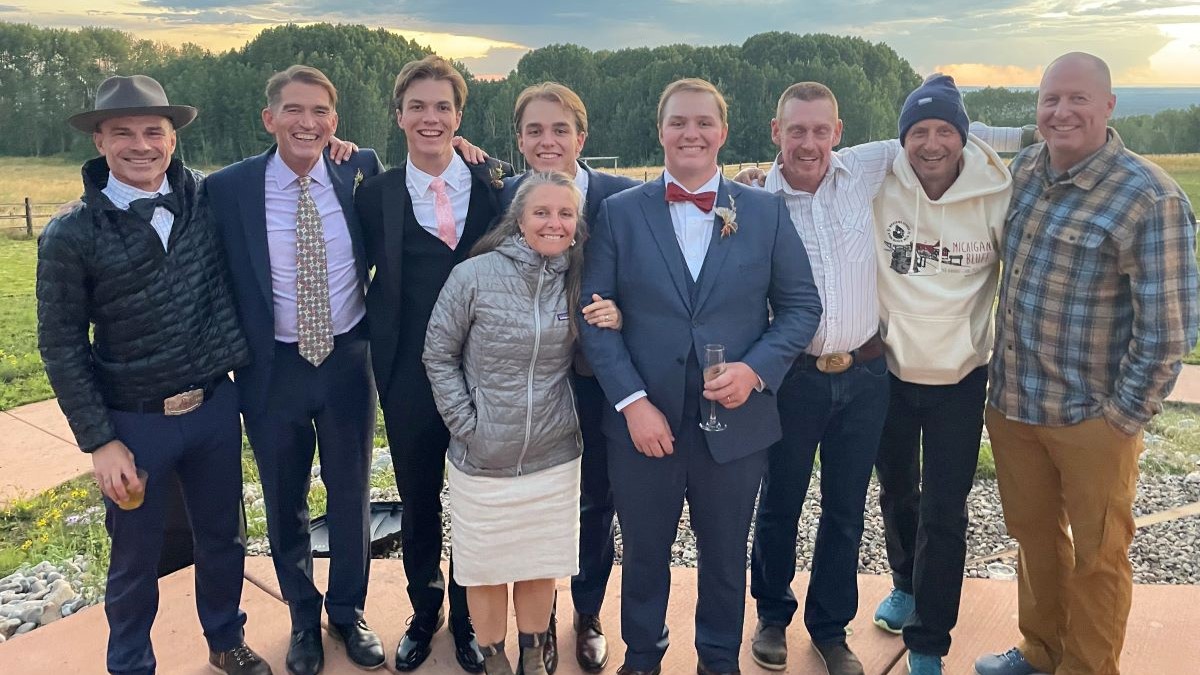 Again in late June on my flight again east from the Western States 100, I settled into my seat, opened my laptop computer, and commenced planning for the remainder of the summer time. Having simply been as soon as once more impressed by the triumph of the human spirit that the Western States 100 provides up each 12 months, I used to be eagerly trying ahead to a couple months of constant coaching, continued rehabilitation, and a centered return to doing what I cherished. Looking at my Google calendar on that eastbound flight I believed, I can do that.

Then, because it generally does, life bought in the best way.

The creator with family and friends at his son, Carson’s, wedding ceremony. Photograph: Joan Anderson

My spouse, Shelly, and I had been scheduled to pack up our home and put together to maneuver west to our new dwelling in Arizona in early July. Evidently, each of us forgot that we weren’t in our twenties anymore, and our do-it-yourself transfer ended up taking about thrice longer than anticipated. Then, as if on cue, my beloved 2005 Toyota Prius went on the fritz with a blown-out hybrid battery, bringing us down to at least one automobile.

With that as a backdrop, we needed to by some means get our youngest son, Tully, out to Oregon, our center son, Logan, to Virginia, and me to my oldest son’s bachelor celebration — a four-day river journey on the San Juan River in Utah — whereas additionally schlepping our stuff from Pennsylvania to Arizona. Evidently, these Western States 100-inspired goals of constant coaching flew out the window.

Via all of it, I made it to the bachelor celebration/river journey and issues had been going tremendous till the second to final day. My son thought it might be a good suggestion to have me navigate the river solo in a type of inflatable “rubber ducky” kayaks, which went nice till I used to be unceremoniously bucked out of it throughout a very tough part. Once I lastly dragged myself onto the shore a couple of half mile later, I had a badly bruised tailbone and a large quadriceps contusion that made my leg appear to be it belonged to the Michelin Man.

The creator and sons on the San Juan River in Utah. Photograph: Chris Thornley

About two weeks later, I may lastly stroll with out a limp, though sitting down on my bruised tailbone nonetheless introduced with it a sense of somebody jamming a knitting needle into the bottom of my backbone. Good occasions. I survived my son’s wedding ceremony over the U.S.’s Labor Day weekend in early September, however then the automobile guys from Pennsylvania known as. The hybrid battery had been changed and I may come decide up the automobile. Downside was, I used to be in Colorado. So, my center son, Logan, the one who wanted to go to Virginia, gave me a experience to Pennsylvania. I picked up my automobile and drove again, lastly attending to Arizona late final Sunday evening.

Now, lastly, two and half months later than deliberate, I may get again to constant coaching, continued rehabilitation, and a centered return to doing what I cherished. There was nothing that would cease me!

And, I’m completely satisfied to report, my day-to-day life these final 10 days has lastly been what I envisioned it might be all these months in the past. I awake every morning to get pleasure from a mild four-mile run by way of my new neighborhood, adopted by a 45-minute session of workout routines at my native Planet Health. After a productive workday, I head out into the desert for an hour hike/run adopted by some gentle stretching and energy work. No agenda, no forcing issues, simply getting again to regular now that life is not in the best way. Completely happy fall, everybody!

AJW’s Beer of the Week

This week’s Beer of the Week comes from Flying Fish Brewing Firm in Somerdale, New Jersey. Salt and Sea Session Bitter Ale is marketed as a sessionable gose and it doesn’t disappoint. Mild and crispy at 4.3% ABV, Salt and Sea is the quintessential summer time beer. The tartness, fruitiness, and wealthy saltiness make this distinctive beer really one among a sort in an more and more crowded selection.

Regular service has resumed. AJW getting his mojo again within the Arizona desert. Photograph: Andy Jones-Wilkins